May 26, 2018
I have less than zero interest in going back to places to take further photos. Once I've been, I've been. It's a nice illusion to believe in getting something the first time and that's it, (or else accept having got nothing of worth at all, pah). But no, one has to go back. Many times. Beyond the limits of mental endurance, and deep into the area of un-bearableness, which causes a heaviness of being, I find. Back, back and back again. And then more. But subsequently when arriving I usually have a sinking feeling that I've over gone back and there's nothing more I can do. That dismal feeling is not the case at site D, yet, but it's only been a mere five or six times so far, at site A it must have been at least fifty, many of them in the middle of the night.  The fear of getting caught (again), is also a deterrent, to wanting to go back and today I was met with two security staff after an hour and a half, just as I was leaving. They watched my slow exit off the site and actually said nothing, not a word. I wondered if I was deemed too unworthy of a talking-to/questioning, and consequently felt everso slightly disappointed as I slunk away. It might be my age.

I'd gone back this afternoon particularly to face the fear of climbing the steps that rise up to the top of the building, about seventy feet or so (20 metres), to the hoist operators platform level. I'd been surprised how scared ascending them I'd been last time and wanted to see if I could do it without so much quivering this time.  I was going to take pictures of the roof-lights from up close but in the end just standing on the ground and looking up was all I wanted to do, and I don't think I bottled it. Possibly. Despite being 1.in a former factory and 2. being pans I'm not sure these images necessarily fit with any long running previous themes, they look so different, but it was an absorbing challenge to get the rhythm looking right, with attempt after attempt.

I took 200 panoramics, about half of them done in a straight direction motion as the camera is designed to do, and half with a wavy movement of the camera to try and disrupt objects in the frame, which often ends in pan-fail, but surprisingly sometimes works, kind of.  I'm on my second WX80, they're amazing, tiny cameras - and, bonus, the battery never runs out, helpful if not good at remembering to charge it.

Moving the camera through various pan movements feels a bit like performing minimal contemporary dance moves. Or maybe yoga, when I start the pan bent over backwards, pointing behind me. If anyone was watching I must look drunk, especially with the prolonged standing still after each sweep, staring down at the tiny monitor screen as the camera laboriously processes the file and generates a preview. I've think my images probably look at their most interesting when viewed super small. There's still hope.

The long rows of vintage glass panes high above, some yellowed, some clear, (some missing), were like primitive, (lovely), stained glass. Former heavy industrial buildings seem to echo with the same oppressive, melancholic redundancy of cathedrals. 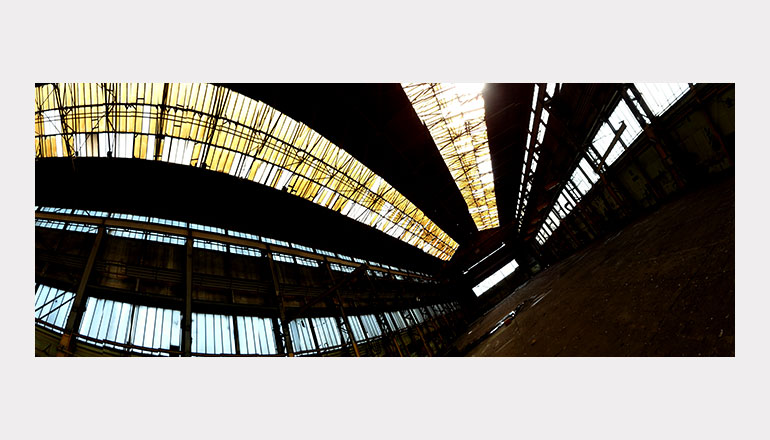