November 15, 2015
The forecast was 80% chance of rain but while there were only a few drops once I got to site B the cloud was nevertheless fairly heavy. The Merrill camera blows highlights very easily and as the LCD and histogram are both unreliable it was a matter of taking repeat shots and reviewing with exposure warning overlay to show up problems handling any part of the sky.  I still erred on the side of caution and at times was under-exposing by a stop. Converting to web size files always brightens them back up about a stop but the original files are very gloomy, which I quite like.

A brand new shiny metal fence had appeared since I was last there a couple of weeks ago.  At site A I eventually noticed the tendency at construction sites to keep renewing fences.  It's up there with randomly moving huge mounds of earth, hard core or debris from one place to another and then back again as something they do. These wire fences are six feet high and clipped together, it's a bit awkward but not impossible to clamber over by wedging the toe of a shoe into a gap and on top of the bottom clamp.  But this afternoon as there were several roofers working who had a grandstand view of what I was up to I postponed that idea and instead took two sets of the 150 metre length of fence itself, one horizontal format and one vertical, from left to right each time.  The vertical puts more emphasis on the cloud at the top of the frame which feels existentially numb

I remember the weekend when that little black fibreglass or plastic tarp (not sure which) at the bottom of the frame first appeared, several months ago. At the time it seemed innocuous but was in fact some indicator of major landscaping work which would level an embankment behind it. 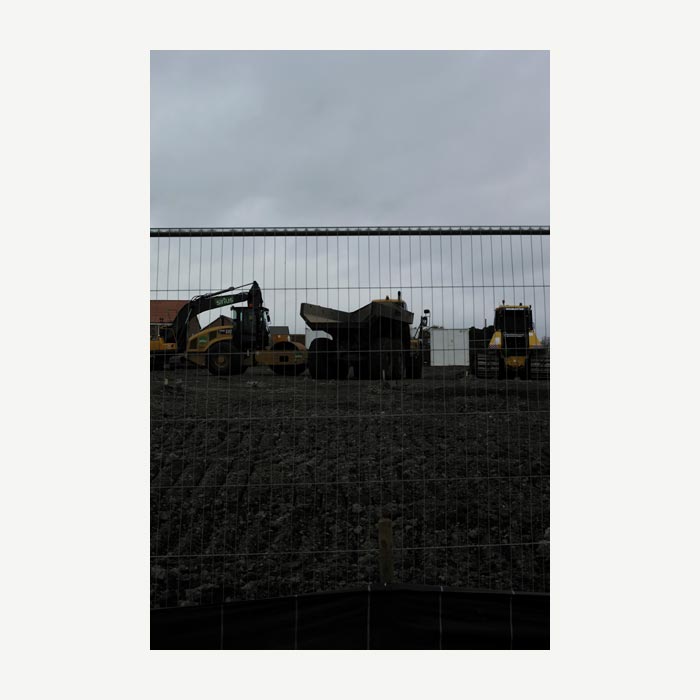