The possibility of flowers

March 01, 2015
Bulbs. They look so unlikely to harbour the possibility of flowers.
I am sure it has been done a hundred thousand times before but I decided to take some before photographs of the ones I have to pair prior to planting & to diptych them with the flowers they become; when they have found a footing, braced themselves, gripping, hatched and stretched; stemming, emerging, ascending, leafing, finally unfurling, blossoming into colour in the heat of summer. (Perhaps.)
A long time ago, I used to place a sheet of white paper behind mum's flowers to photograph them (before I let her garden decay into a dismal nothingness over several years). But flowers are not usually considered a credible photographic subject, probably being linked so closely with 'beauty', and so regarded with a similar disdain that ordinarly people reserve for ugliness (the absurd long ago became the new beautiful). Beauty probably needed a good kicking, it had become too full of itself for its own good.
One of the exceptions to the flowers as subject thing was Robert Mapplethorpe's flower photos, and were it not for his more controversial sexually explicit subjects they might have been dismissed, too. But they acknowledged as a super-elegant surprise counterpoint to all that hardcore flesh. (Final interview, in 1988.)

So, bulbs, and the fact they look so unlikely to harbour the possibility of flowers.  Diptychs.  Self portraits. 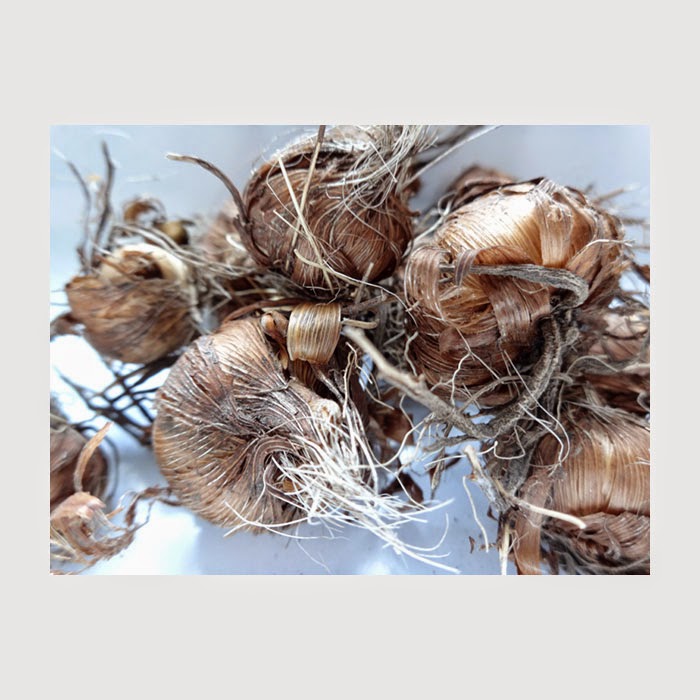