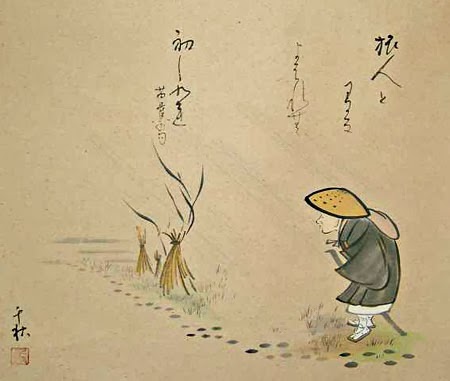 Even in Kyoto,
how I long for Kyoto
when the cuckoo sings


It's the shortest day of the year, the start of winter.  A blowy, almost mercury sky, but not cold and fine for an early afternoon stroll... and without a camera.  All the ones I've owned this year have been either tried and sold or returned with faults.  It felt like going out without some essential item of clothing, or an arm.


A friend recently mentioned her gratitude jar.  I sometimes find it harder to remember amongst the inevitable difficulties there are still good things, and moments when life surges through one's blood and the thrill is just as wide and lovely as when first felt a lifetime ago.

Without thinking I ended up at the path where I have so often in the past taken photographs of the houses being built, a path that has been 'improved' recently.  This has entailed destruction of half the trees and bushes alongside it and coating it with a thick layer of gooey soil that makes it scarecely usable.  I presume this is for the benefit of the future occupants of those nearly completed new homes, to improve their view across open land beyond the trees.

So, not taking pictures, I chose the other, non-slimey path, the one which most people use anyway to walk their kids or dogs, which runs along the other side of the remaining trees.  So now I was viewing those brand new houses in a brand new way, only partly obstructed through the thinned out line of bare trees, whose bare branches were tilting out but mostly leapt into the sky.  Some trunks were bare, others heavy with dark green ivys.  The undergrowth between was rough, entangling with some bare patches.  A few pale yellow leaves have survived the recent wild weather, and there were occasional vivid spots of red berries on spindly bushes amonst the sombre palette.  A tiny, faded bird, plump, shuffling on a branch uncomfortable being watched, soundlessly swooped away into a thicket of branches.

The houses are mostly finished, with red or pale brickwork or, some have cream rendering, just a few are still at the point of being a breeze block frame, dark from last night's rain, pinned with scaffolding.