October 09, 2013
To quote from his Daybooks, October 14th 1931: on having to make a living taking photographs he regards his studio "portraits (as) so nauseating that I have covered them over when signing my name.  Some are horrified at physical prostitution, and I agree it must be inconvenient and often disgusting. But I am prostituting my spiritual self every week of the year. A few might feel and share the shame of my degradation."

There are so many moments in Weston's record (written very much for posterity) where the rickety self-justifications for his  value system collapse - his back-stabbing of friends, carping about the work of other photographers, ripping off Mexican peasants, resenting the working class expectations of decent pay (he believes in 'surival of the fittest!').  At one point he almost abducts a 'pretty' beggar girl in the street of a town he is passing through - to give her a better chance in life with him - but the girl's pleas for him to speak to her mother first means she ultimately slips through his fingers.  His revelry in bullfighting - and anger at DH Lawrence who contemporaneously writes about its barbarity.  - But to regard actual prostitution as little more than 'inconvenient' compared to his own indignity at having to take photographs of people for money...

Weston mythologised himself and his achievement.  His vision was nowhere near as unique as he insisted but the timing for a return to 'straight photography' was right, for him and the others of that generation (including Paul Strand, Walker Evans, Dorothea Lange, Imogen Cunningham, Charles Sheeler).  If Weston had been European he would probably not even be known now.  He happened to be embraced by a surging, progressive American movement, open to photography in a way that certainly was not the case in Britain, but which was elsewhere (particulary Hungary, France, Germany and Russia).  Weston was prepared to not only claim equal status for photography to painting but at times to consider painting as now redundant.  If necessary he was prepared for photography to circumvent the need for all important categorisation as an 'art' if needs be, such was the belief in the medium.  This confidence was inherited from Alfred Steiglitz, mentor to most of them).  This is more impressive as he knew that it almost certainly entailed a life of penury.

The works, his and others, were radical in oppostion to pictorialism (a faux painterly soft focus style that had become dominant).  But this was not new - Carelton Watkins and Timothy O'Sullivan had undertaken extensive landscape projects with the emphasis on precision image making with large format equipment over half a century earlier.  And they were not alone.  When Weston sees a book of Atget's work (made decades earlier in France) he diminshes it, finding it empty.  (In fact when Weston sees any other competing photographer's work he immediately diminishes it.)

Perhaps if Weston had worked in Brittany, making photographs of shells and peppers in the 1920s I expect American collectors would have little or no interest in him.  In large part his value seems to be that he is seen as a central figure of an American movement.

But there is no arguing with his productivity.  He spent most of his life compulsively taking photographs, and needless to say some of these are significant, regardless of their place in dusty histories of photography or their $500,000+ present day valuations.  Perhaps an ego of vast proportions - one morning he ruminates that he is probably the greatest portrait photographer in America, and therefore the world - was indispensible to maintain his resolve to keep working.  And times were often hard, he might photograph bananas as that was all he could afford to buy with the 35 cents he had left - and knowing he could eat them afterwards was central to that creative decision.

It was a print of his - dead pelican - that when I was 15 or 16, bunking off school, which I rarely did, I came across in the local art gallery.  It was printed at contact size but had incredible presence despite its small size and age. Even in my everyday general teenage miserableness I felt aware of its significance - as Weston often notes, he had the power to reveal.  This photographer had come upon death, and had clearly expressed himself in this particular way with a camera on a beach in California a lifetime before - and I knew exactly what those minutes felt like to him.  Ironically, the effect was like being woken up from the general numbness and endless dazed stupor that was my way of being alive. 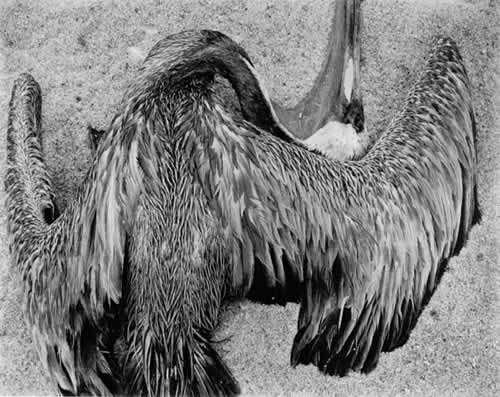