Walking through the English countryside

April 27, 2013
I sometimes think (usually in the depths of winter each year) how in the faraway summer of the year ahead that I will go off somewhere and spend days walking across miles and miles of the pretty English countryside.  Up hills, down through valleys, around lakes and through woodlands and little villages with old churches, clambering over stone walls and somewhere far,  far away in the shade of a tree stopping to eat a sandwich and drink a can of Tango.  - But having just walked less than ten miles today, nah. 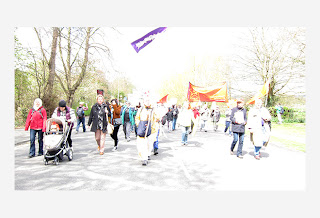 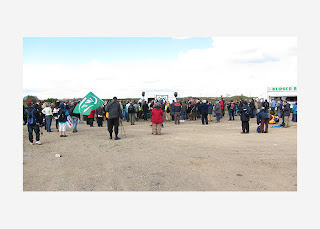 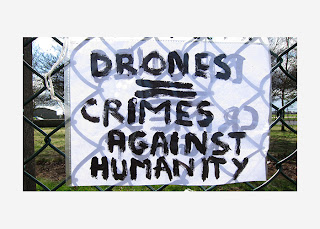 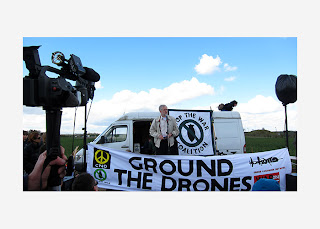 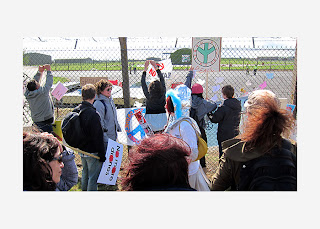 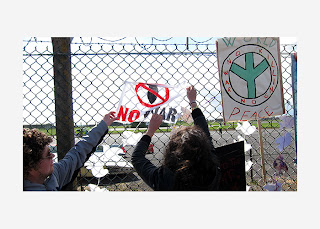 There were communists and socialists and methodists and quakers and buddhists and muslims and feminists and trades unionists and trendy people and shabby people (me), people walking their dogs or with push-chairs, leggy women TV producers,  smiling old ladies, couples holding placards and holding hands, kids on bikes, - and endless numbers of photojournalists, students and activists with cameras. I take a lot of self-portraits but I've never been photographed so much in my whole life, ah.  The police were numerous but I have to say their presence wasn't intimidatory, though maybe someone should tell them that in air conditioned offices within that airbase people are now routinely making decisions on whether to kill Afghan people several thousand miles away, but I guess that kind of murder doesn't seem to count somehow.

People made short speeches. It was sunny, there was a cold breeze like it was still winter.  A woman climbed on to the roof of a transit van behind the speakers to take photographs facing towards the crowd.  The landscape is flat, there are even more clouds in the blue sky than there are people with cameras, it looked just like a traditional English summer's day.