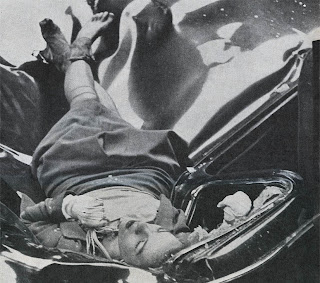 This detail from a photo by Robert C. Wiles was published as a full-page image in the 12 May 1947 issue of Life Magazine. It ran with the caption: “At the bottom of the Empire State Building the body of Evelyn McHale reposes calmly in grotesque bier, her falling body punched into the top of a car.”
Evelyn, still clutching a pearl necklace, looks disarmingly placid and composed – as if simply asleep. Around her, however, the broken glass and crumpled sheet metal of a car roof show the brutally destructive evidence of her 1050 ft jump.


Warhol used the image during his early 60's Death and Disaster series.  His primary intent may have been concern with morbid media saturation and de-sensitisation: 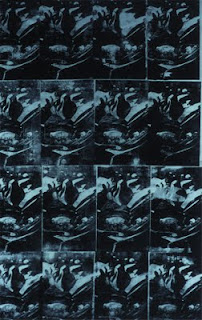 
“I don’t want anyone in or out of my family to see any part of me. Could you destroy my body by cremation? I beg of you and my family – don’t have any service for me or remembrance for me.
My fiance asked me to marry him in June.

I don’t think I would make a good wife for anybody.

He is much better off without me.
Tell my father, I have too many of my mother’s tendencies.”

Little is known about her life.  Apparently her mother left the family home when she was a child and her father applied for and won sole custody of the children.  For me I think her note suggests her reasons, both where she refers to having her mother's tendencies, and in wanting her body destroyed by cremation, not wanting anyone to see any part of her.

The opportunistic photograph ensured her first wish was not realised. Like many of the most important photographs the insensitivity in its taking is often overlooked or perhaps admissable for most people, particularly when the outcome is such a profoundly affecting document.  But in the 70's academics and intellectuals became more scrupulous, critical of everything from the tawdry invasiveness of photojournalism to cheap modalities of dissemination and vicarious, (presumably) disposable consumption. The impact was quite extensive but ultimately their analysis put in place just one more value system for a subsequent generation to have to deconstruct, ignore, or simply get bored with.