December 20, 2011
Sunday was freezing but with dream-like bright sunshine.  Being so close to the shortest day the shadows even in mid afternoon were stretching far away. The blue sky looked like it was summer while five layers of clothing was just about enough to bear the cold.

A lecturer on my course (long ago) had insisted that the Topographics style of photography was defined by the steeply overhead light (of the American mid-west), and that particular look could not be re-created in Britain - a couple of us tried adapting it to our higher lattitude and our damp island air.  But he had a point.  On Sunday the fierceness of the light was enough to appear to be burning up certain angles of objects while leaving other parts utterly lost in shadow - it was severe and wonderful and I felt as close as I've come to aligning what I could do with a camera to something I had loved in Lewis Baltz's New Topographics.  Oddly I was minded in particular of his winter series  'Maryland' (1976)  where he had headed further north and his subtle handling of the light and dark in the photographs was revelatory. 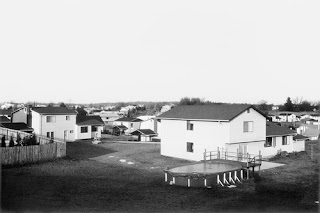 The actual location I wanted to get to was off limits and so I needed to get in the back door.  It was a very circuitous route and for a half an hour I just glimpsed in the distance where I wanted to be.  Finding a way across several hundred acres of what was damaged land littered with rusted metal, rubble or weird chunks of blistered glass (as if melted by a nuclear blast) lying half buried in the earth which nature had now started to reclaim.  Thickets and wetlands - dozens of flooded gravel pits - operated like a maze, requiring plenty of back-tracking or, if lucky, coming across someone's earlier efforts to make a path through this uncertain landscape. 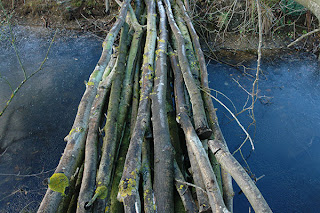