April 09, 2016
Like images from several of his series, this is distressing.

A couple of years ago someone I know whose photography I rate very highly ridiculed Serrano which scared me off him for a long time but yeah, I feel he is probably the most significant photographer of the last generation. On one website (in French) they were questioning if he should even be called an artist. He might be dismissed as controversial (or too much 'ham') but his key theme is astonishing and profound, in the face of most imagery which is neither, what it means to be flesh and blood (and so often profane) when you also believe we have a divine soul or spirit. That archaic semi-religiosity seems at odds with today's world, especially in a medium that is now largely concerned with refining a new digital aesthetic, but at least allowing for his intent means what seems provocative becomes more evidently an act of impressive tenderness in the face of fear and doubt. Even outside the mythology of a loving divine creator, he brings emphasis to how fragile (and potentially abhorrent) it is to be a human animal. He is a full-on hard-core existentialist working at an extremely intimate level. And, this foetus whose eyes will never open, whose bruised hands are never to clasp hold of anyone, is a study of himself and of all of us. 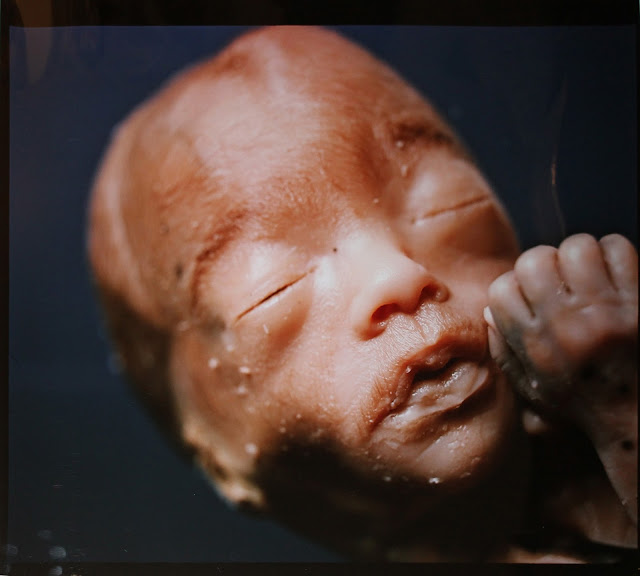